Declaration of Independence at The Hempsted Houses 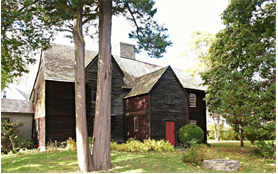 Join local community members at the Hempsted Houses for a dramatic reading of the Declaration of Independence on Sunday, July 5th at 2 pm, as we celebrate Independence Day! The Declaration announced that the thirteen American colonies, then under British rule, regarded themselves as a new independent nation – the United States of America. To give voice to the Declaration of Independence, program participants from different parts of the New London community will share in the reading paired with excerpts from Frederick Douglass’ speech, “What to the Slave Is the Fourth of July?” Join us to celebrate the power of freedom and community as we consider the fight for freedom today.
Click here for more information about this activity

Admission is free; donations are welcome to support programming at the Hempsted Houses. Advanced registration is required as space is limited, register at https://hempsted-declaration-reading.eventbrite.com. Day-of event registration will be allowed only if the site has not reached capacity. In the event of inclement weather, the program will be held on July 12th at 2 pm.

In order to protect the health of our staff, visitors, and community, all visitors must wear masks and adhere to social distancing guidelines. The historic house museum interior will remain closed to the public.

*Times, dates, and prices of any activity posted to our calendars are subject to change. Please be sure to click through directly to the organization’s website to verify.

All Ages Adults & kids together Adults without kids