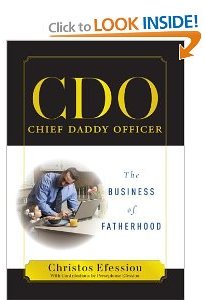 The topic of women in the workplace has enjoyed a recent renaissance, thanks in large part to Sheryl Sandberg, Chief Operating Officer of Facebook. In her book Lean In: Women, Work, and the Will to Lead (Knopf, 2013), Sandberg urges women who value their careers to lean in: Lean in to work, and don’t pull back in anticipation of having a family. Instead, maximize your potential until children arrive, and then tailor your career to a family life. Sandberg firmly believes that a woman can have both. She also advocates a lot of “lean on,” as in lean on your spouse, the father of your children. Make him a truly equal partner in family matters.

I think that idea has legs.

I can confirm that my husband is living that dream. With a child-to-adult ratio of 2:1 in our house, Ed assumed an equal share of the child rearing from the get-go. At one point, we had 3 kids under the age of 3! His parenting skills could easily double as survival skills.

But now that we have moved beyond the bottles and diapers (our kids are now 3, 5, 6, and 20), he has a little time to take stock and—dare I say it—read. I found the perfect book for him. 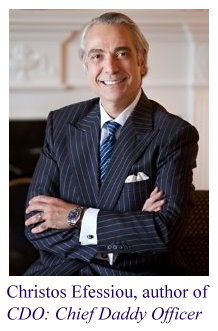 CDO: Chief Daddy Officer: The Business of Fatherhood, by Christos Efessiou, is a slim tome that offers a plan for men seeking to balance work and fatherhood. Efessiou is an entrepreneur who has had a successful career as founder and CEO of his own company. He was also a single father to his daughter starting from when she was 7.

Throughout the book, Efessiou applies his considerable experience in the business world to the business of fatherhood. He discusses the merits of staying calm, speaking respectfully, listening carefully, and taking feedback. He also underscores the importance of being present, physically and mentally, in a child's life, instead of escaping into the more stereotypical role of working father. He calls on fathers to step into the role more famously attributable to mothers" as nurturer, listener, and child’s biggest fan. It’s a call for men to lean in—at home.

Why we liked this book

When I first picked up this book, I saw the promotion on the dust jacket: “Who says there is no manual for raising children?” I thought, Brother, that is one lofty claim. But as I began to read, I realized that Efessiou is on to something. This is an exhortation to parent deliberately from a man who, before his daughter was born, decided that if he could make a business plan, he could make a parenting plan. He could set goals for himself and his daughter. He could be proactive instead of reactive. And periodically, he should step back to see the big picture.

And what is the big picture? To Efessiou, the big picture is that we aren’t raising children, we are raising adults. And he keeps that in sight throughout the book; along with maintaining a great sense of humor (also evident in the engaging writing).

After I finished this book I passed it right to my husband. Ed takes his parenting role very seriously, and though he is not exactly an avid reader of parenting philosophy, he’ll take a little input now and again. Because Ed is a police officer, comparing fatherhood to running a business isn’t the most useful metaphor for him. But this book, rather refreshingly, is written in man-speak that can engage men no matter what their career. It was direct and concise, with hand-wringing and guilt noticeably absent. That’s right, no guilt! Just a generous helping of staying calm, listening carefully, and laughing whenever possible.

So, ladies, is there a man in your life who is on the threshold of fatherhood? Or a seasoned veteran with the spit-up on his shirt to prove it? Make sure this book finds its way on to his night table for Father’s day. You can tell him it’s the manual. No business degree required.